A case study in the use of Poll Everywhere in large lectures.

Michael Murray is a lecturer in Developmental Genetics in the School of BioSciences, Faculty of Science. He co-teaches a large 2nd year subject, Molecular and Cellular Biomedicine with over 500 student enrolments. In a Learning and Teaching Initiatives (LTI) grant he led, Michael and his associates (Robb de Iongh, Terry Mulhern, Vicky Lawson, Trent Perry and Odilia Wijburg), as well as other lecturers in the subject, trialled Poll Everywhere in their lectures and workshops. With his peers, Michael implemented Poll Everywhere in various ways throughout the subject.

Students first exposure to Poll Everywhere was via a poll before the subject even started. The Poll Everywhere trial was explained and students were asked to respond to a poll via an HTML link in the LMS. The subject has a reputation of being difficult and this poll was for students to share their feelings around undertaking the subject. Results to the poll were anonymous, embedded in the LMS and updated in real time so students could see if others were feeling the same as them.

Michael also implemented an occasional poll question throughout his lectures that tested understanding of content just taught. Michael had to pitch the questions so they were not too easy and therefore considered flippant, while complex enough to challenge students' understanding and whether they could effectively apply the knowledge taught. The thought and preparation that went into designing the right questions was the most time consuming component of implementing Poll Everywhere.

Poll Everywhere has the ability to display a PowerPoint slide whereby the poll updates dynamically as students use their mobile devices to respond to the poll questions posed. Michael and his peers found that for most polls, it was best if the results were hidden in the first instance, with a poll response counter showing on the slide. Once the response count reached a reasonable proportion of students, one could reveal the responses and share the correct answer. With the results exposed, misconceptions were revealed resulting in deeper discussion to further understanding. If responses were not hidden, students quickly ‘followed the leader’ to respond.

After each of Michael’s lectures, students were asked to complete a survey poll. A survey is a collection of polls that can be accessed at a single URL. These questions tested the knowledge that had been taught in the lecture. Students found that completing the survey was very easy with Poll Everywhere’s responsive mobile design. He would start the next lecture displaying and discussing the correct answers from the poll survey. He would also display a Learning Objectives poll to evaluate understanding of the lecture’s pre-reading.

A popular poll type with several of the lecturers was the "clickable image" poll. These could be used in a variety of ways, such as to identify oncogenes in a cancer pathway diagram, or to identify where a chickenpox virus might enter/exit a child.

Other poll types allow free text responses. This lets student write anything they wish in response to a question, instead of selecting an option from choices given. This is a great way to gauge student understanding and get a wider range of ideas and was used in overnight surveys by Michael. In a live setting, however, students can write inappropriate things that get displayed in real-time on the screen for all to see. To combat this, Poll Everywhere provides a moderation option for free text polls. Although challenging with the large lecture size, this approach was successfully used by some of the lecturers.

The reporting aspect of Poll Everywhere was very simple and helpful to use. Poll Everywhere could generate an executive report with just the click of a button on given polls that was easy to interpret and share.

Michael conducted a Poll Everywhere survey to get feedback on using the tool to complete the LTI grant. Of the 500 students, 238 responded. 97% of students thought the polling was useful. 9% of students said they did not have a device so did not partake, and 28% chose not to partake in polls directly but instead watched their friends. 61% of students found post lecture surveys useful for their learning and completed them. Students reported that they found Poll Everywhere most useful for consolidating their knowledge.

In reviewing overall marks for the cohort compared to other years, grades were slightly but significantly higher. Overall, Poll Everywhere appeared to have a positive effect on learning, and in conjunction with the positive comments from students, has meant the team will continue using Poll Everywhere in their lectures. 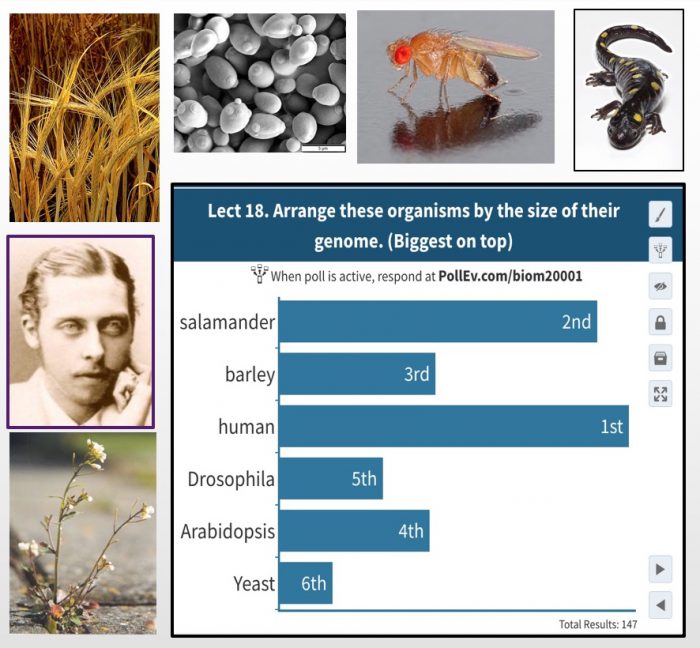